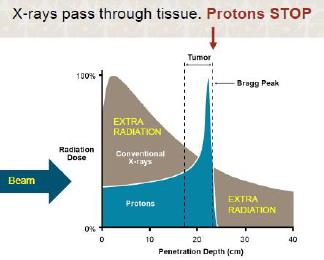 Methodology and its advantages

The most advanced front of Radiotherapy (RT) is now represented by Hadrontherapy (HT), which uses a beam of heavy subatomic particles with positive charge: protons or carbon ions (C).

Protons have charge + corresponding to hydrogen atoms deprived of their single electron. Carbon ions, heavier than protons, are charged ++ because they derive from the carbon released by its two electrons.

Protons and C ions have the ability to interact with the DNA molecule (in the nucleus of the tumor cell) despite the strong chemical bonds that characterizes this nucleic acid. The impact between protons or C ions and DNA is “rough”, “αδρος” in ancient Greek, which led to the definition of “Hadrontherapy” (HT) the procedure using these positively charged particles.